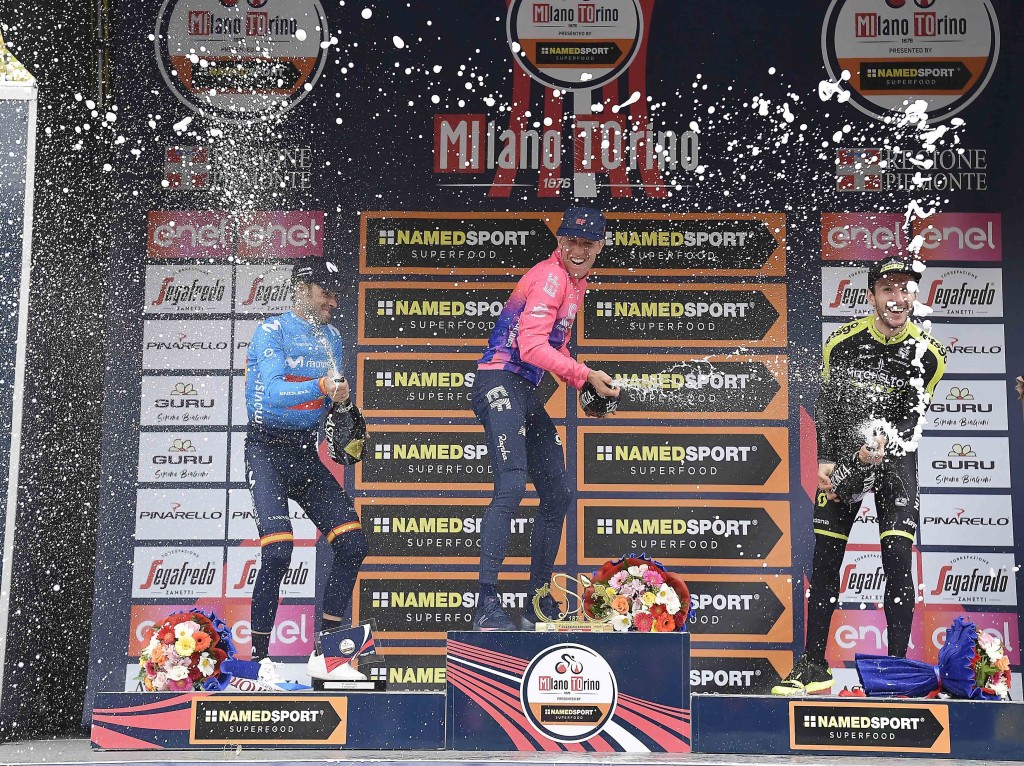 Canada’s Michael Woods (EF Education First), a former world-class runner, claimed his first one-day race victory at the world’s oldest classic, Milano-Torino, the same event in which he announced himself as a pro cyclist with a second place three years ago. He outclassed Alejandro Valverde (Movistar Team) and Adam Yates (Mitchelton-Scott) up the hill to the Superga Basilica ahead of Saturday’s Il Lombardia on the day he’ll turn 33.

The winner Michael Woods said in the post-race press conference: “I was questioning whether or not I should go hard, considering the weather conditions and Il Lombardia being a big goal of mine on Saturday, but at the same time, the finish suited me so well that it was hard to pass on the opportunity to go for the win today. I knew I was on a really good day, this climb favours somebody who attacks and is really offensive. That was the way to put everyone else under pressure and try to discourage them, and I think it really worked out. After what I achieved here, I’ll be considered a favourite for Il Lombardia but I haven’t made the top 10 in that race yet, so my first goal will be to make the podium and win it later in my career.”

Alejandro Valverde, second, said: “Michael Woods is a worthy winner but I also want to thank my team for the great work they’ve done. I’ve waited for my time to produce my effort. I would have liked to win. But we’re quite happy with the second place. I’ve missed the win by very little. I’ve lacked a bit of confidence. If we analyse the week of racing with a fifth place, a second place, yesterday’s bad luck and today’s second place again, it means I’m ready for Il Lombardia on Saturday.”

Adam Yates, third, said: “It would have been better to be on the top step but I tried my best and the team was really good today, especially Jack Haig. Heading to the final climb, he did a massive pull to position me and I always had the guys around me to keep me safe for the final. Everyone knew Michael Woods would be one of the guys to beat today. He showed he has the best legs, especially for this climb. I congratulate him. He played it perfectly. Il Lombardia on Saturday will be a complete different race than today. Today was pretty pan flat before the final. On Saturday it’ll be a more tiring race from start to finish. I’ll give my best and I hope I’ll pull off a result.”