On 6 and 7 October the two classics return. The Milano-Torino will start from Magenta and finish atop the Colle di Superga while the GranPiemonte will begin from Rocca Canavese, with an arrival in Borgosesia.

The two RCS Sport classics were presented today at the headquarters of the Piedmont Region in Turin. On Wednesday 6 October the Milano-Torino presented by Eolo will take the peloton from Magenta to Turin, with an uphill arrival on the Colle di Superga which will be climbed twice. The next day, the GranPiemonte presented by Eolo will take place, with a route suitable for sprinters that starts from Rocca Canavese to reach Borgosesia after 168 kilometers of racing.

The race starts from Magenta, and crosses the Po Valley on flat roads that pass through an area of rice fields, touching Novara and Vercelli to reach Biella before tackling the short climb to Zimone. Then the route returns to the flats through the Po Valley with wide and mainly straight roads that lead to the final circuit.

After San Mauro Torinese the route follows along the Po river in Corso Casale then progresses up to the Basilica of Superga for the first time (with a turn 600m before the finish line). Then it’s down to Rivodora with a demanding descent that brings the riders back to San Mauro, and up to the finish with gradients of over 10%. There is a feed zone at km 89-92.

The last 5km are repeated twice (except for the final 600m) from Turin in Corso Casale, where the climb to the Basilica of Superga begins. The average gradient of the Colle di Superga is 9.1% with a peak of 14% at around halfway up, and long stretches at 10%. At 600m from the finish line there’s a U-turn left to face the final ramp, with an 8.2% gradient, and then a final bend just 50m from the finish. 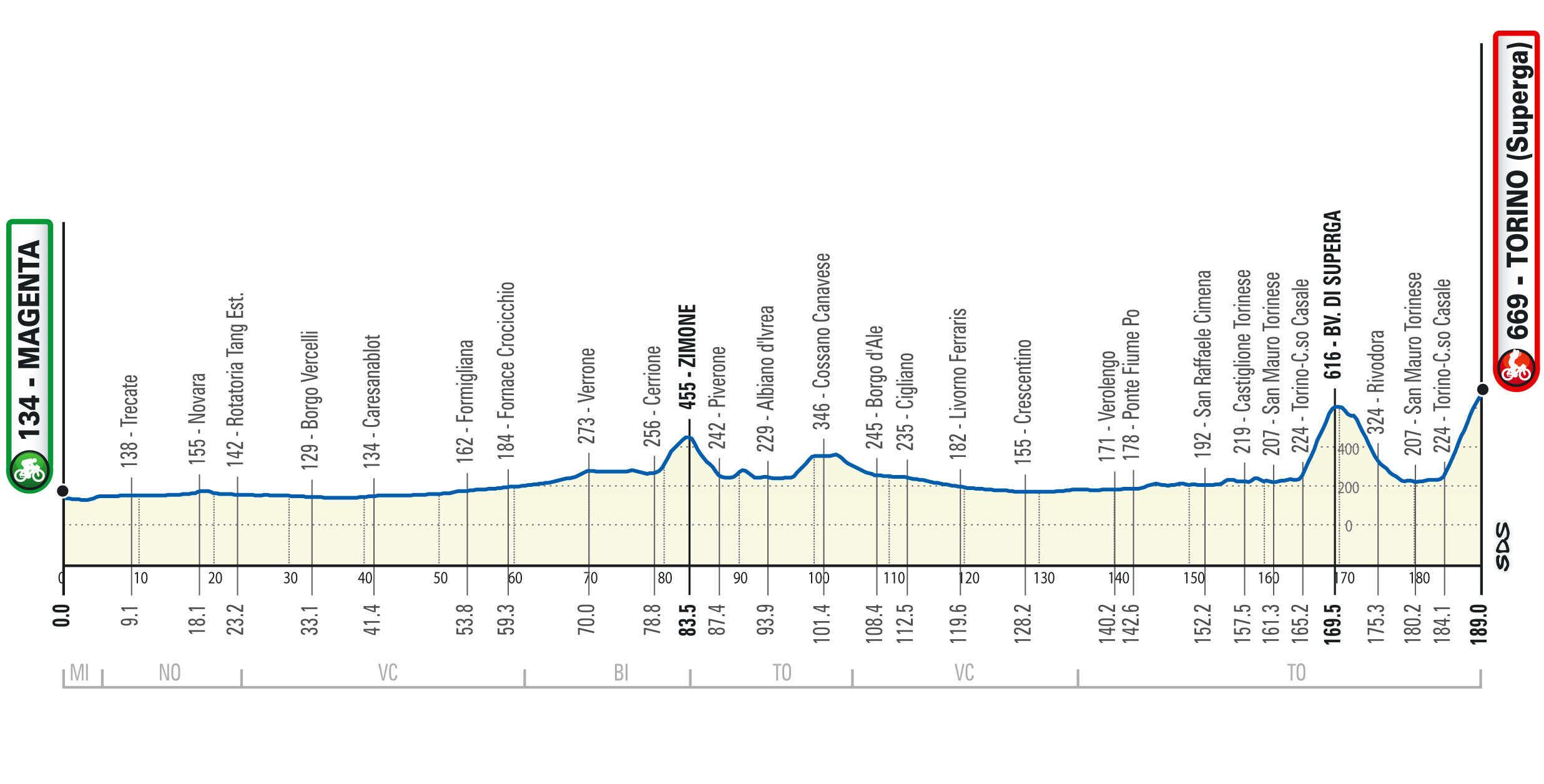 The 105th edition of the race runs along a substantially flat route from Rocca Canavese to Borgosesia. The route crosses the undulations of the Canavese area and climbs the Serra after Ivrea. It then heads down to Biella and, after having touched the Prealps, it reaches the Valsesia valleys where the race finale takes place with a circuit of about 35km. The riders will enter the circuit via Gattinara then pass near Borgosesia after first crossing over to the other  side of the river. They will then tackle gentle undulations near Azoglio before returning to Gattinara and, from there, back to the race’s finish line in Borgosesia.

The last 5km are steadily uphill on medium width roads before the final straight.

Paolo Bellino, CEO and General Manager of RCS Sport said: “The strong relationship between RCS Sport and the Piedmont Region continues, which this year has already hosted the Grande Partenza of the Giro d’Italia and four stages of the race. The GranPiemonte will take the peloton from Piedmont’s Canavese to Valsesia. Superga, meanwhile, will be the setting for the finale of the Milano-Torino, and Magenta will host the start of the oldest classic for the third year. As is the case every year, these two races will welcome some of the strongest riders on the international scene. Cycling is not just a sport and form of entertainment but also an exciting vehicle for the promotion of tourism and the territory, with images of the two races, and of the territories they cross, broadcast and seen on the five continents“.