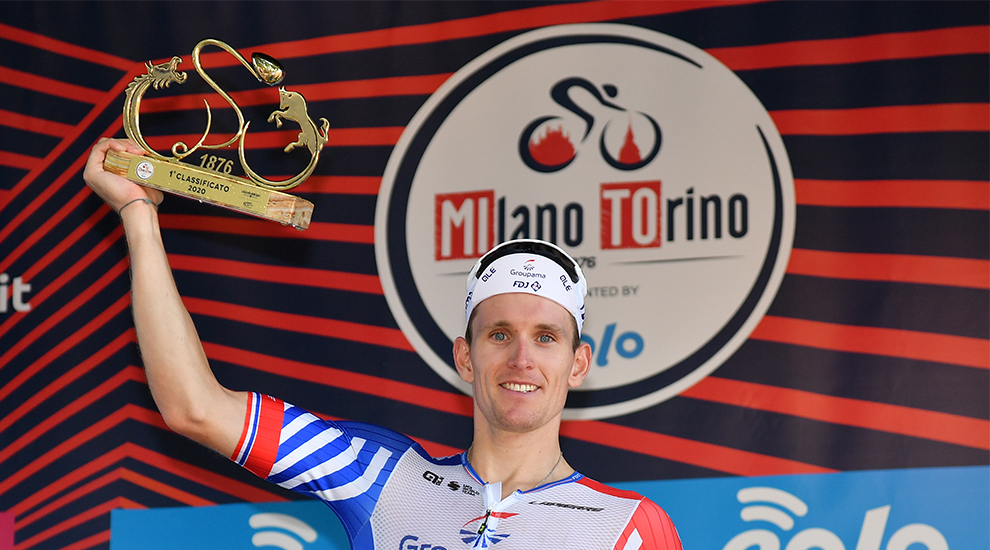 Arnaud Démare (Groupama-FDJ) hunted down his rivals to win the bunch sprint in the 101st Milano-Torino presented by EOLO, crossing the line in front of La Palazzina di Caccia (the hunting residence) of Stupinigi that used to host Emperor Napoleon. Four years after claiming Milano-Sanremo, the Frenchman is back on track to win ‘La Classicissima’ once more, while Australian sprint ace Caleb Ewan (Lotto Soudal) and Strade Bianche winner Wout van Aert (Team Jumbo – Visma) came home second and third respectively, also positioning themselves as favorites for victory on the Via Roma.

The winner of the 101st Milano-Torino presented by EOLO, Arnaud Démare said in the post-race press conference: “I came here knowing that I’m in good form with a competitive team that’s performing better than ever before. I already realized at Vuelta a Burgos that our training camp had paid off. Winning today is important and it’s a good sign ahead of Milano-Sanremo. As a team, we’re feeling calm and confident. I’m not worried about the new course. I don’t know if [the addition of] Colle di Nava will make it better or worse. It’ll be a discovery for everyone. Teams of six riders only might open the race up or make it even more controlled. In this new situation, racing the first Monument in August, I’ll have to make a move instead of just waiting for the sprint.”

Second placed Caleb Ewan, said: “I still don’t like to come second, but I’m happy with how things went for my first race back after five months, especially ahead of Saturday. I was where I wanted to be in the last corner. My team got me in a good position. I just had to sprint for too long.”

Third placed Wout van Aert, said: “I’m satisfied with the result, especially in this strong field of sprinters. I might have been able to do slightly better with better positioning but it’s part of the game. I was tired on Saturday after Strade Bianche but over the last two days, I’ve felt better already. It’s really good to have a race like today’s in the middle of the week. It was super fast without being very windy so it made for very good preparation for Saturday. My confidence is high before Milano-Sanremo.”