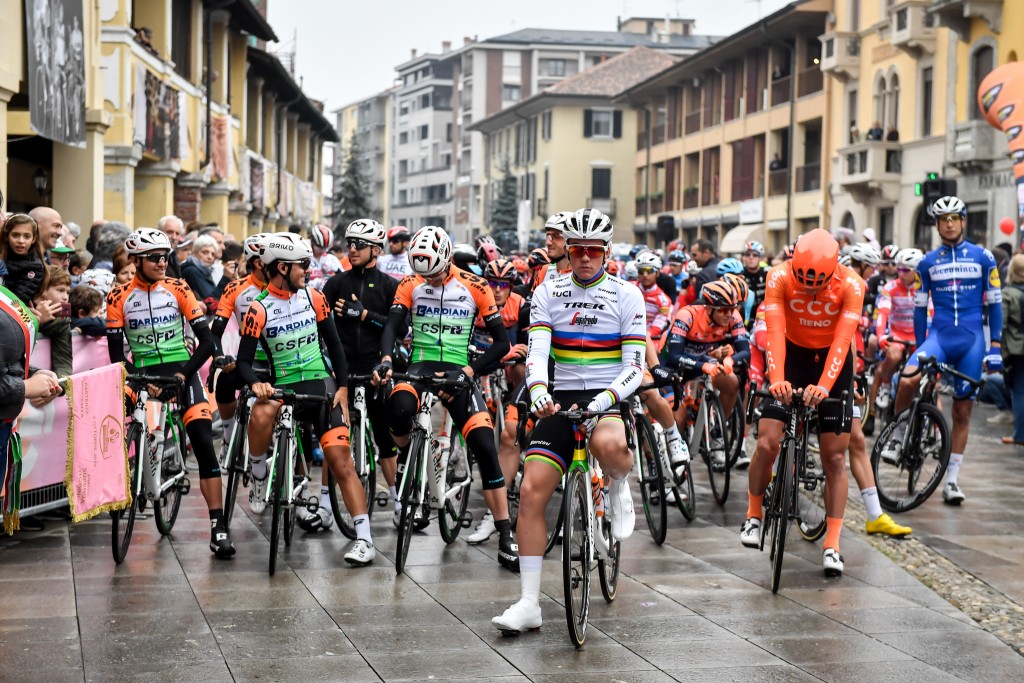 Milano-Torino NamedSport, first held in 1876, the oldest race on the international calendar. The first edition was won by the extraordinary Paolo Magretti, naturalist, explorer and cyclist. This year’s edition, the 100th, started this morning in Magenta, and finishes, after 179km, at the Basilica on the beautiful Superga – the hill that overlooks the city of Turin.

The list of the riders equipped with the Velon data-tracking system is available at this link. Their live data can be viewed at http://www.milanotorino.it/en/live/

After departing from Magenta the riders cross the Padana plain on flat, wide, straight roads with a long route through the Abbiategrasso, Vigevano and Lomellina territories up to Monferrato. Here the race profile begins to change with the gentle ups and downs of the Casale Monferrato area before returning to the wide, straight roads that lead to the final circuit.

After San Mauro Torinese the route goes along the Po river in Corso Casale then up to the Basilica of Superga for the first time (with a turn 600m before the finish line). Then it’s down to Rivodora with a demanding descent that brings the riders back to San Mauro, and up to the finish with gradients of over 10%. There is a feed zone at km 89-92.

The last 5km are repeated twice (except for the final 600m) from Turin in Corso Casale, where the climb to the Basilica of Superga begins. The average slope is 9.1% with a peak of 14% at around halfway up, and long stretches at 10%. At 600m from the finish line there’s a U-turn left to face the final ramp, with its 8.2% gradient, and then the last bend is at 50m from the finish.

Magenta is located 20 minutes from Malpensa airport and 20km from Milan. Originally a village in the 14th century, and a city since 1947, it now has a population of approximately 23,000. Villa Castiglioni houses the seat of the Parco del Ticino, and the surrounding territory has a rich natural and farming landscape, with an invaluable forest heritage that has already disappeared elsewhere in the Po Valley. The city is mainly remembered for the historical battle fought on 4 June 1859, a decisive event in the Second Italian War of Independence, as part of the Italian Risorgimento and Unification. The Battle of Magenta is remembered every year on the first Sunday in June with a festival that celebrates history and culture, as well as solidarity and unity among the nations. The historical re-enactment in period costumes is the highlight of this event. Major landmarks include Casa Giacobbe and the ossuary, a memorial to the battle, which are open to the public. The Lyric Theatre, the Magenta Orchestra and three historic bands, as well as a number of choirs and events reflect the city’s long-standing musical tradition.

This ducal city’s salad days were under the Viscontis and the Sforza. The cathedral is dedicated to Saint Ambrose, the town’s patron saint, and overlooks the magnificent Piazza Ducale – built in just two years by Ludovico Maria Sforza, also known as Ludovico il Moro. Under Bramante’s Tower, the road leads to the Sforza Castle (Castello Sforzesco), in the valley of the River Ticino. The church of St Peter the Martyr (San Pietro Martire) is another important landmark.

A hunting estate for the Sforza family in the 15th century, and a personal fiefdom of Ludovico il Moro, Mortara became a Royal City under Victor Amedeus II (1666-1732). It is home to a number of ancient religious buildings, including the Basilica of San Lorenzo (1375-1380) and the 16th-century Church of Santa Croce. On the last Sunday of September, the town hosts a festival of traditional goose salami, at the same time as the Palio di Mortara, when the seven opposing neighbourhoods of the city challenge each other to a life-sized game of “snakes and ladders.”

The village of Giarole was founded in the 13th century, when the local population moved from the surroundings of the church of San Pietro and relocated around the newly built castle. The palace was constructed by the Sannazzaro family, following the authorisation of Emperor Barbarossa. The castle was captured by the Palaeologus during the war against the Visconti of Milan in 1338, and was only returned in 1380. It was reconstructed and remodelled over time, and today the oldest wing is the one that extends towards the 14th-century church of San Giacomo, while the southwest and northeast towers date back to the 15th century. The two major renovation works involved the castle wing closer to the village in the 1700s, and the entire building, including part of the interior, in the mid-19th century.

A small town in the hinterland of Turin, built around a 1000-year-old Benedictine abbey. The commune includes the Superga Natural Park, a protected area with trails and paths that lead up to the Basilica, and the finish line of the Milano-Torino NamedSport. The park has some curious architectural landmarks, including the Villa Lavista, an eclectic mansion in three different styles: Baroque, Neoclassical and early-Art Nouveau.

Surrounded by the mountains that hosted the 2006 Winter Olympics, Torino is the guardian city of the origins of Italy. It was the first national capital, and is home to Palazzo Madama and Palazzo Carignano, the original seats of the Italian Senate and Parliament. The city is also symbolised by the Mole Antonelliana, which towers high in the sky.

Torino is a notable tourist destination, thanks to its many architectural landmarks and museums, including the second largest Egyptian museum in the world after the one in Cairo; the Museum of Cinema inside the Mole Antonelliana; and the Residences of the Royal House of Savoy, which are UNESCO World Heritage Sites.

After the 2006 Olympics, it became a major seat for many sporting events. In 2016, it hosted the Giro d’Italia’s grand finale and the Olympic basketball qualifying tournament. Historically, it has been home to two major Italian football clubs, Juventus and Torino; more recently, since 2015, it has made its comeback to the top league in basketball, with the Auxilium Cus Torino team.

Many worldwide recognised symbols of “made in Italy” have their origins here, including Martini vermouth, Gianduia chocolate and espresso coffee. Furthermore, the city is the major hub for Italian automotive production, being the seat of FCA and of its brands that marked the history of car manufacture.

The verdant hills overlooking the city, opposite the mountains, are home to the majestic Basilica of Superga, the finish location of the Classic. It is connected to the city either by the race route or by the Sassi tramway, which runs along the hill. The Basilica was commissioned by Victor Amadeus II, Duke of Savoy, and designed by the gifted architect, Juvarra (as was the Palazzo Madama). This Baroque building houses the Royal Tombs, made for the members of the House of Savoy, which can be accessed from inside the Basilica.

More recently, Superga has become a pilgrimage destination for the fans of Torino FC, every year on May 4 since 1949. A memorial stone (which can be reached from the path running left of the building) was erected at the back of the Basilica, to commemorate the “Grande Torino”, the great team that fell victim to an air disaster on the hill of Superga, while flying back home after a game in Lisbon.

The RCS Sport October classics will be broadcast on all five continents.

In France the three races will be offered live free to air on La Chaine L’Equipe, while Eurosport will offer them live to all the fans in the rest of Europe, in Australia and in South-East Asia. The “Classic of the dead leaves”, the last Classic Monument of the season, will also have unencrypted coverage in Switzerland on the SRG SSR network and in Belgium, on Q2 (VTM) in Flemish and on La Une (RTBF) in French.

For the rest of the world, the RCS Sport autumn classics will be broadcast on the screens of the Abu Dhabi Sports Channel throughout the Middle East and North Africa and by Supersports in South Africa. Japanese fans will be able to follow the races on OTT DAZN, New Zealand fans on Sky Sports.

Coverage in South America and the Caribbean is guaranteed by the ESPN network, while in Mexico the three races will be broadcast on TDN at a later hour. In the USA and Canada the three classics will be available on OTT Fubo.tv and Flosports.