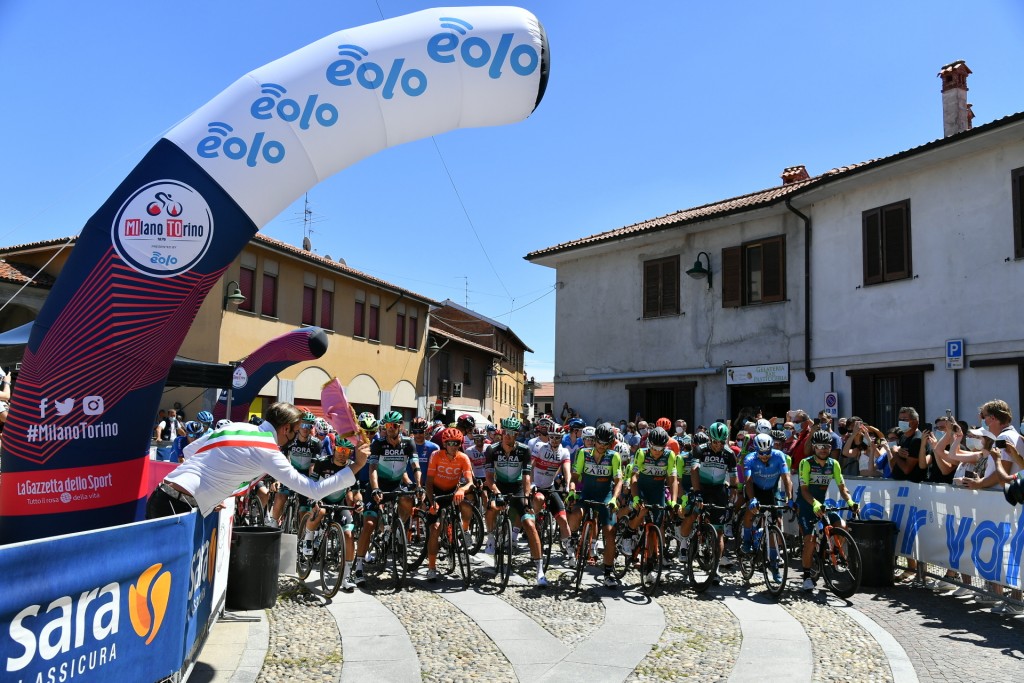 Good morning from Milano-Torino presented by EOLO, first held in 1876, the oldest race on the international calendar. The first edition was won by the extraordinary Paolo Magretti, naturalist, explorer and cyclist. This year’s edition, the 101st, started this morning in Mesero, and finishes, after 198km in Stupinigi (Nichelino), in front of the Palazzina di Caccia.

The list of the riders equipped with the Velon data-tracking system is available via this link. Their live data can be viewed at http://www.milanotorino.it/en/live/

The oldest relic in Mesero is a Roman altar that can be dated quite confidently to the 1st century AD, which reveals that Mesero had been inhabited since the Roman era, and that it was a place of worship. However, a comprehensive land register was created only in the 18th century, under the Austrian rule. Such record showed that agriculture was based mostly on cereal crops, viticulture and sericulture, which were the mainstays of local economy throughout the 19th century as well. Industrialization only began in the post-war period, taking over the former rural setting, and is still ongoing. If you happen to be in town, you should absolutely visit the many noble houses, and especially Villa Colombo – the oldest and best preserved one.

Back in the Middle Ages, when it was first settled, Vigevano was a fortified town sitting by a ford along the Ticino. After gaining freedom, it was long contested between Pavia and Milan, owing to its strategic location.

Vigevano eventually fell under the rule of the Della Torre family, and achieved its utmost splendour starting from the 14th century, under the Visconti. Later on, in the mid-15th century, it turned into a ducal town under the Sforza family, becoming a thriving centre for trade and skilled craftsmanship. For centuries, the town had been a major textile centre, especially for silk and wool. However, in the latter half of the 19th century, textile production gave way to footwear manufacturing, which has continued to date. If you happen to be around here, the Castello Sforzesco is a definite must-see. Standing at the highest point of the town, it was built in two consecutive steps, first under the Visconti and then under the Sforza family, with major artistic contribution by Donato Bramante. In the late 15th century, the architect also built the iconic Torre del Bramante, standing at the highest point of the town, and with an unusual tapered shape.

River Tanaro crosses a divide in the territory of Monferrato (Montferrat). The northern part (Basso Monferrato), lying between the Tanaro and the Po, is a land of plains and gentle rolling hills, while the southern part (Alto Monferrato) extends from the banks of River Tanaro to the Apennines, acting as a watershed between Piedmont and Liguria. This stunning territory, whose extension has changed throughout the centuries, is a treasure chest of castles, old churches and picturesque mediaeval villages, lying on the gentle hills, among the vineyards. The Montferrat is indeed one of the major wine districts in Italy, where several red and white grape varieties are grown.

Located in the Basso Monferrato, Portacomaro is named after “Gens Comara”, the noble Roman family which founded the town as a military camp in Gaul. Agriculture, and especially viticulture and winemaking, are currently the mainstays of local economy. Despite being born in Buenos Aires, Argentina, Jorge Mario Bergoglio (best known as Pope Francis), traces his roots to this place: it’s where his great- grandfather was born and raised, before he moved to Turin and finally emigrated to Argentina.

Asti lies between two hills, the Montferrat and the Langhe, at the heart of the north-western province of Piedmont. It was first settled by the Romans around 124 B.C., later became an economic and political power in the Middle Ages, and then continued to prosper, fall and rise again repeatedly throughout its long and eventful history. Currently, Asti is mostly renowned for its premium cuisine, its world-class Spumante, as well as for the Palio, a bareback horse race through the city streets. Asti is synonymous with history, culture and cuisine. As the primary centre of trade of Piedmont’s wine district, in the midst of the beautiful vine-clad gentle hills, the city awaits you to pamper you with the best of local wine. Outstanding architectural heritage includes the majestic Cattedrale di Santa Maria Assunta, originally built in the 13th century and refitted in the 1800s.

The history of Carmagnola began around the 11th century. Shortly after, the city fell under the French rule until 1588, when it was besieged and captured by Charles Emmanuel I, hence becoming a possession of Savoy. France conquered Carmagnola once again in the 17th century, and it was not until 1691 that the town became a possession of Piedmont again, under Victor Amadeus II of Savoy. As the defence structures of the city were taken down, and its strategic role became increasingly less important, agriculture and trade were finally starting to bloom, prompting massive immigration and promoting a fast urban sprawl, up to the second post-war period.

If you happen to be around, do not miss the opportunity to take a walk downtown and visit the church of Sant’Agostino, which has retained markedly Gothic features – such as the apse, the east transept and the tall, slender bell tower – though it was restored and refitted throughout the centuries.

Stupinigi is most renowned for its 18-century hunting lodge (Palazzina di Caccia), a UNESCO World Heritage property, and for its nature reserve and park. The construction of the hunting lodge complex, commissioned by Victor Amadeus II of Savoy, began in 1729 on a possession where a small castle had survived to the Middle Ages. The building was enlarged under Charles Emmanuel III and Victor Amadeus III to include horse stables and farming sheds, with valuable contribution by great architects such as Bo, Prunotto and Alfieri. Napoleon Bonaparte lodged here in May 1805, on his way to Milan to receive the Iron Crown. Since 1919, the Palazzina has been the seat of the Museo del Mobile, and the venue of several international art exhibitions.

Covering a large area of forests and farmland, the park was declared a nature reserve in 1991 (Parco Naturale di Stupinigi). There have been no deer since the 19th century, but the park is still home to rare plant species and wildlife.